Shows how AI+SDN can realize a self-healing video service

1 November 2017 – LONDON, UK: AI and networking pioneer Aria Networks is showing how the combination of software-defined networking (SDN) and AI can be used to create a self-healing network.

In a demonstration on show at LightReading’s “OSS in the Era of SDN and NFV” event, Aria shows how a 4K video service overcomes network congestion by using AI to dynamically reroute the service, across a virtualized network.

The showcase incorporates the use of an SDN controller based on OpenDaylight – the industry’s leading opensource SDN controller development platform, run under the auspices of the Linux Foundation.

“SDN allows network configuration to be changed in real time, but does not itself decide what the best configuration is,” said Aria CTO Jay Perrett. “The design of networks and services is hugely complex, whether in response to customer demands or to planned and unplanned outages in the network. We’re using AI to automate that design process, which means service providers can deliver on-demand, and keep service-level commitments, with zero touch.”

“The big difference is that we’re not having to pre-engineer routes on the network, or use passive policies that can only switch between a limited set of routes. We’re using AI to design and configure the optimum solution in real time, and the full power of SDN to execute that on the network. This saves hours or days of effort, and radically reduces pressure on service assurance and network ops teams. For example, designing high quality video streaming service for live events.”

To demonstrate the solution, Aria uses the Mininet network emulator to create a node of virtual switches. This creates a virtual software-defined network (SDN) that the OpenDaylight (ODL) controller can then be used to control. The software runs on virtual machines deployed on a network of Raspberry Pi computers. 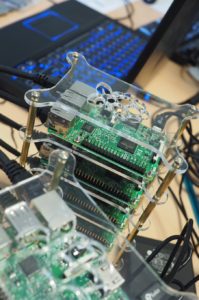 OpenDaylight is the foundation of many commercial SDN controllers, including Cisco’s Open SDN Controller (OSC) and offerings from Extreme Networks, Inocybe, Lumina (ex Brocade). According to the Linux Foundation, OpenDaylight-based controllers support the services of over one billion internet users today.

“This is much more than a demonstrator”, added Perrett. “Virtual switches are the equivalent of vCPEs, so what we’re showing today could be applied to an all-IP video broadcast network with no change whatsoever.”

“SDN is sometimes inaccurately described as a software ‘brain’ for the network – it isn’t. It’s more like the nervous system, that can transmit decisions taken in the brain to the parts of the body that need to respond. The brain is the intelligence that figures out which possible action – of all the available options – is the best one to take. That’s why the combination of AI and SDN is the real key to automation.”