Next week’s SDN Congress will cover a lot of ground. In this fast-moving area, it’s important to keep track of the various acronyms and initiatives. Here’s Aria Networks’ guide to the essential industry initiatives, acronyms, buzzwords and hot topics you’ll need to hit the ground running.

Project Ocean is Vodafone’s umbrella name for its vast SDN/NFV program. With five separate presentations at the SDN Congress, Vodafone will be offering a unique insight into its plans.

Along with AT&T, Vodafone is arguably one of the industry’s most ambitious – yet also well-advanced – virtualization programs.

According to Group Head of Network Virtualization, David Amzallag, Ocean is “a mega transformation”, scoping in 60 different operating companies across the Vodafone family, including wholly-Vodafone-owned and part-owned operators.

MANO stands for “Management and Network Orchestration” and is a framework created by ETSI to define the interfaces between, and functions of, various components of a virtualized telecom infrastructure.

In other words, the software platform that looks after instantiating, scaling, configuring virtualized functions.

The original ETSI scope still represents the industry’s baseline as a reference architecture, but it’s now only one of several competing options.

One key point to note is that ETSI MANO’s frame of reference is the provisioning of virtualized network functions. This means that many other aspects of actually providing service – from network planning to billing to service assurance – are outside the scope of MANO. As such, ETSI MANO can’t be considered as a *complete* orchestration solution for operationalizing virtual network functions. But a vital part nonetheless.

AT&T took a look at ETSI MANO and decided it wasn’t quite what they were looking for. So they set about building their own, ultimately with the assistance of Amdocs.  The result is ECOMP – Enhanced Control, Orchestration, Management and Policy).

AT&T was already committed to a massive virtualization initiative called “Domain 2.0”, a vision through 2020 for how the company would leverage virtualization technologies, including SDN and NFV. The company has a well-publicized goal of virtualizing 70% of its network by 2020. (The 2013 vision paper is here. )

ECOMP as the name suggests extends the scope of orchestration beyond the ETSI MANO reference, particularly into the service lifecycle domain with design & creation, policy management, analytics and overall inventory management (the AT&T Active & Available Inventory).

In July the company announced plans to open source its eight million lines of code, via the Linux Foundation. At the same time, Amdocs was announced as the lead systems integrator equipped to deploy ECOMP at other carriers. Verizon [see below] said it has “no plans” to use AT&T’s code. (By contrast, in September 2016, Orange announced plans to test and trial ECOMP, with a view to using it within its On-Demand Networks program.)

Though more comprehensive than ETSI MANO, even ECOMP might not *quite* do it all – see that pesky “BSS/OSS” box to the top right?

In Feb 2016, as something of a counter to AT&T’s ECOMP reveal, Verizon shared their reference architecture for SDN/NFV.

As with other SDN and NFV architectures, pre-existing OSS/BSS remains part of the overall landscape, suggesting that service providers are looking at SDN and NFV less as a replacement for existing networks, more as the preferred path for future service rollouts.

ONOS is another open-source initiative, this time to create the Open Network Operating System, a sort of operating system for SDN.

The focus is on enabling carrier-grade features within the SDN control plane. That is, high-availability and high-performance features for controlling the network that service providers require.

The idea is that applications can pass simple requests to ONOS (say, for a 10G link between two datacentres, optimized for cost) and ONOS takes care of it. That might include scheduling of future requirements.

In essence, ONOS looks a lot like covering the ground of conventional EMS and NMS, though from an SDN perspective.

ONOS runs as a service on a cluster of servers, supporting applications above, and driving the physical network below. 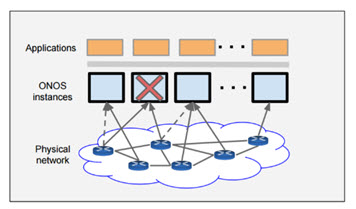 ONOS launched in November 2014 and is a product of ON.Lab, the Open Networking Lab, a collaboration involving over 50 partners and collaborators, including AT&T, Cisco, SK Telecom, NTT Communications, Ciena, Fujitsu, Huawei, Intel and NEC.

The best-known application of ONOS is in the CORD initiative (see below).

The ONOS founding whitepaper is here.

OPNFV is an Open Platform for NFV, announced by the Linux Foundation in 2014.

The goal is to develop a platform for developing and testing new NFV functionality.

OPNFV is different from other opensource initiatives in being a non-operational system: it’s a dev/test platform. Functions created using it can then be deployed into live operations.

Initially focused on building NFVI and VIM, it has expanded its scope to look at (development and test for) MANO components as well.

OSM stands for OpenSource MANO. This is ETSI’s own initiative to provide an open-source implementation of ETSI NFV MANO. Telefonica is the main service provider backing OSM, having already been in development for a year or so before going public.

As well as Telefonica, OSM counts around 25 other service providers or vendors as partners, including BT, Telekom Austria, Sprint, Korea Telecom.

Set up in May 2016 under the auspices of the Linux Foundation, Open-O was created to provide a unified orchestration platform across SDN and NFV.

Open-O is broadly comparable in scope and ambition to AT&T’s ECOMP. In other words, an extension of ETSI MANO.

If network kit is gradually being supplanted by software equivalents, it stands to reason that local exchanges (or Central Office, if you’re in the US) will become mini data centres. That’s what CORD is all about.

CORD stands for Central Office Re-architected as a Datacenter and is an attempt to combine SDN, NFV and cloud computing to bring new economies (cost savings) and agility (new service rollout) for service providers.

AT&T alone operates 4,700 central offices, which have evolved over time and contain a wide variety of equipment of varying age, complexity – and economic viability.

CORD is one example application of the ONOS initiative. As such, CORD represents an effort to assemble pre-existing open-source and commodity components into a practical application.

At the SDN Congress, expect to see plenty of discussion on software-defined WANs.

For businesses, SD-WAN represents an alternative to traditional enterprise networking such as MPLS or dedicated links. SD-WAN is predicted to grow rapidly: IDC estimates a $6bn market opportunity, from the low hundreds of millions today.

Level3 is among the early providers of SD-WANs, along with Verizon and Singtel.

One of the key challenges for SD-WAN providers will be ensuring service quality and overall capacity management as business customers flex their demand in real-time.

At the SDN Congress, the Metro Ethernet Forum (MEF) has a whole section of the program on Friday 14th October.

MEF has been in existence since 2001, with a vision of “network as a service” long before that term was just another “-aaS”.

MEF’s focus is on Carrier Ethernet services. Specifically, making it easier to assure, virtualize and connect CE networks. To quote their mission statement: “MEF is the driving force enabling Third Network services for the digital economy”, with over 200 collaborating operators and vendor members.

MEF’s work is rather different in nature to the other initiatives mentioned already. It takes a more holistic and operations-focused view, in the sense of trying to define standards to bridge conventional BSS/OSS with SDN and NFV, and across multiple network domains, with a specific aim of making it easier to deliver (assure, operate) an end-to-end service. 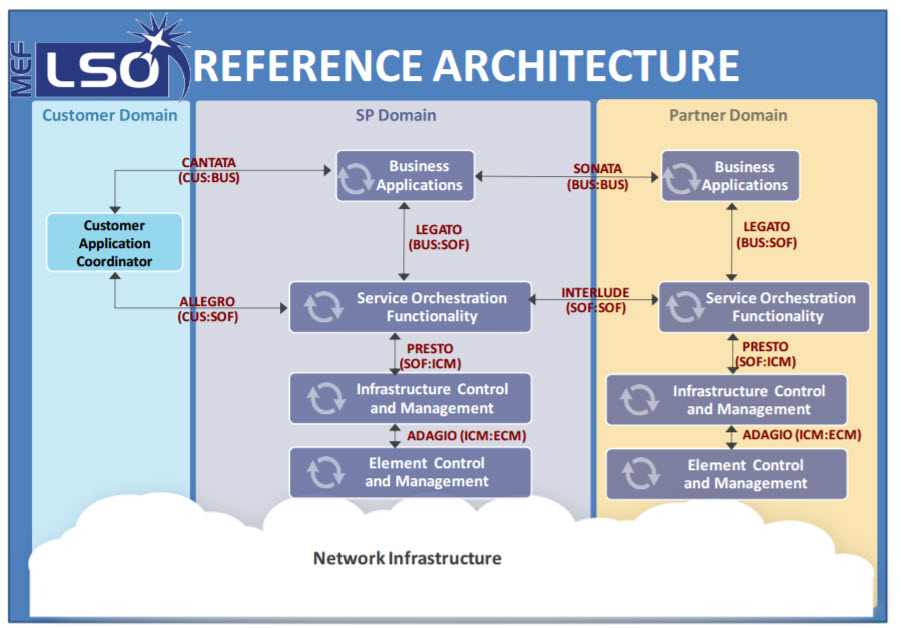 To some extent, SDN and NFV have become intertwined with MEF, rather than arising from its work directly.

On Friday the 14th, member company Level3 will be presenting on use cases developed by MEF that combine open source and proprietary components to speed delivery of carrier Ethernet services.

The Layer123 SDN Congress should provide a fascinating snapshot of progress towards new business operating models in the virtual world. Meet us there!